The Deep, story by Eric Wald and Dean White

March 29, 2018
Siren (formerly known as The Deep) is a Freeform drama mystery–thriller television series that premiered on March 29, 2018. The series is based on Eric Wald and Dean White's mermaid story, The Deep.

In the mermaid-obsessed sea town of Bristol Cove, everyone’s lives will change when actual mermaids come ashore, causing sides to be taken, loyalties to be tested and a war between man and mermaid to begin.

FREEFORM ANNOUNCES NEW ONE-HOUR DRAMA “SIREN” (FKA “THE DEEP”) HAS BEEN GIVEN A 10-EPISODE SERIES ORDER – Premieres Summer 2018 “Siren” takes us inside Bristol Cove—a coastal town known for its legend of once being home to mermaids. When the arrival of a mysterious girl proves this folklore all too true, the battle between man and sea takes a very vicious turn as these predatory beings return to reclaim their right to the ocean. The series stars Alex Roe (“The 5th Wave”) as Ben, a bright marine biologist who finds himself drawn to Ryn, a mysterious new girl in town played by Eline Powell (“Game of Thrones”), who is a strange young woman with a deep dark secret. Fola Evans-Akingbola (“An American Exorcism”) stars as Maddie, also a marine biologist who works with Ben, and is highly suspicious of Ryn. Ian Verdun (“Life’s a Drag”) stars as Xander, a deep-sea fisherman on a quest to uncover the truth; and Rena Owen (“Star Wars” Episodes II and III) as Helen, the town eccentric who seems to know more about the mermaids than she lets on.

NO. 1 NEW CABLE DRAMA ‘SIREN’ SWIMS INTO SEASON TWO WITH A 16 EPISODE ORDER

Following the news of “Siren’s” premiere as the No. 1 new cable drama with young women (18-34 and 12-34), Freeform announced a second season pickup for the mermaid thriller, whose season one finale airs Thursday, May 24th. The network also added six more episodes to next season’s order, up from ten this season. “Siren” is an epic tale about the coastal town of Bristol Cove, known for its legend of once being home to mermaids. The arrival of a mysterious girl, Ryn (Eline Powell), wreaks havoc on the small fishing town as she proves the folklore true. Using their resources, marine biologists Ben (Alex Roe) and Maddie (Fola Evans-Akingbola) must work together to find out who and what drove this primal hunter of the deep sea to land and if there are more like her. Xander (Ian Verdun) is a deep-sea fisherman looking to uncover the truth and Helen (Rena Owen), the town eccentric, knows more than she lets on. Eric Wald and Dean White co-created the story and serve as executive producers along with showrunner and executive producer Emily Whitesell. Brad Luff, Nate Hopper and RD Robb are also attached as executive producers.[5]

‘SIREN’ DIVES INTO A THIRD SEASON

“Siren,” Freeform’s fan-favorite mermaid thriller, has been picked up for a third season. During the first half of its second season, “Siren” ranked as Freeform’s No. 1 show among Adults 18-49 and Women 18-49. The second half of Season 2 will premiere on THURSDAY, JUNE 13, at 8:00 p.m. EDT/PDT on Freeform. Ben and Maddie are uncertain about the mermaids’ future after the deadly consequences of the attack on the oil rig and, with the mermaids returning to sea, are left feeling lost without Ryn. Once Helen learns she’s not the only one of her kind, she discovers there is a dark side to her people’s past. The series stars Eline Powell, Alex Roe, Fola Evans-Akingbola, Ian Verdun and Rena Owen. “Siren” is executive produced by Eric Wald and Emily Whitesell, who serves as showrunner.[2]

Trailer What If There’s a New Predator? Siren

Trailer She's All You Can Think About Siren 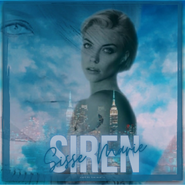