Pilot
Sirens are mermaids who are able to lure sailors towards rocky shores via their hypnotic singing, causing the sailors to crash into the rocky coast of their island, meeting a watery demise.

Bristol Cove was once home to mermaids. Over a hundred years ago, a Siren enchanted the men of Bristol Cove. A Captain, Charles H. Pownall, heard her Siren song. She emerged from the sea to greet him and he fell in love with her. The Siren and Charles H. Pownall fell in love and had a daughter. The daughter was born in transition and appeared deformed. The Siren returned to home to the sea and never returned. The Captain was so bitter and heartbroken that the men sought vengeance on the mermaids and slaughtered them. However despite this he loved his daughter so much that he spared her.

The main difference between mermaids and Sirens is that the latter are predators, killers, and dangerous creatures. Seducing men with their voices and bodies. Mermaids may not necessarily kill men, like Sirens do.

Mermaids are known as beautiful aquatic creatures that used their voices to enchant sailors and fall in love with them.

Like the rest of the merpeople, Sirens have identical abilities and powers with the only exception being the inclusion of the Siren Song: 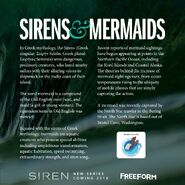 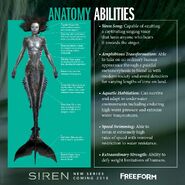